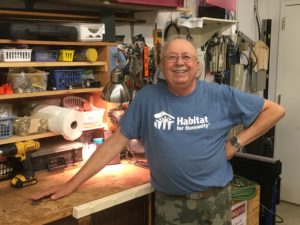 You can often find Tom Massey in the small workshop area carved out at the back of the ReStore. Tom has been a volunteer at Habitat for over four years. “After I retired from AT&T, I was looking for something to do, and I started to volunteer at the build site,” Tom explained. “It was a great experience, but I was ready for something else when someone suggested the ReStore.”

Tom checked it out and found an immediate match. The ReStore accepts gently used items including furniture, and then puts them up for sale. Proceeds are then used to build Habitat homes. “The furniture may come in with a broken leg or a missing hinge. Something that can be fixed if you have the right tools and skills,” Tom said. “Fortunately, I had been interested in working with wood since I was seven years old,” he added. “I’ve always had a workshop and small projects. I stared working in the workshop and at the ReStore and I’ve been there ever since.”

As much as he enjoys working with wood and repairing broken furniture, Tom’s favorite part of working at the ReStore is the relationship he has forged with his co-workers. “I’m able to work with younger people who are really interested in learning the ins and outs of woodworking and repair, and it’s been a really great experience,” he noted. “I’m able to be a mentor to them, and it’s fun to watch their excitement as their skills grow. It’s therapeutic for some of them, it builds self-esteem for others. I don’t know who gets more out of it, them or me.” Tom also enjoys talking to some of the regular customers who come by the ReStore, including one man in his eighties. 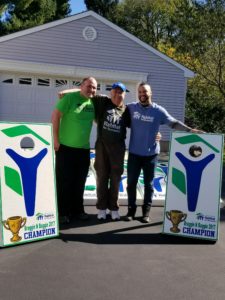 One of Tom’s most recent projects was to support a Habitat fundraiser in Hackettstown that featured a cornhole tournament. “Cornhole” is the backyard beanbag toss game that uses boards as targets. A sponsor donated all the materials required to build eight sets of boards. Tom and his team then researched the exact specifications of the boards according to the American Cornhole Association. They incorporated the Habitat for Humanity logo into the design of the board and created and produced high-quality boards that will be used for years to come.

Tom has participated in the planning for the upcoming move of the ReStore and is excited about the new facility. “It’s going to be a bigger and much better workspace that we’ll have and we’re all looking forward to starting there,” he related. “I’m just happy to be a part of it. I have fun doing what I’m doing and I really enjoy working with the people here.”

It’s safe to say that the feeling is mutual.