Vic Bozzuffi is the Construction Supervisor for the Habitat build team.

Vic is a building contractor in Warren and Morris Counties and a resident of Hackettstown. He has volunteered at Habitat for Humanity for over twenty years. We chatted with Vic about his experiences and about what keeps him going.

How did you get started volunteering for Habitat?

I wanted to give back something to the community and at the same time help people who were in a situation that was less than ideal. I had the skills and I had the opportunity, but back then, there was no Habitat in Warren County. So I volunteered at the Lehigh Valley Habitat. When people began to look at the possibilities of a Habitat in Warren County, I was naturally interested. 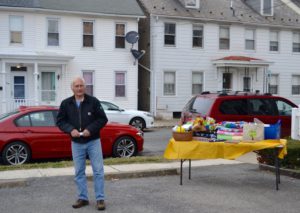 You supervise the Saturday builds. What does a typical build team look like?

There is a core group of 10 -12 guys who show up on a regular basis. That core is blended with people who might come on a less frequent or sporadic basis. We have very talented carpenters, and others that can do lots of different things well. Some are lesser skilled but make up for it with enthusiasm. And there are often small groups from schools or churches or businesses. I always have a set of things that have to get done that day, and my challenge is to match the skills to the tasks in a way that works for everyone.

What is the current project? How is it coming along?

It’s a duplex in Port Colden being built for two partner families. One is a mother, father and four children, the other is a single mother and her son. It’s challenging for many reasons. It’s a two story structure and we normally build simple, one story homes. The architecture is more complex so the structure wouldn’t be boxy and would be a good fit for the neighborhood, and there are angles and heights that we don’t normally see. Two of everything except the septic, and of course, a firewall between the two homes. It’s definitely been a stretch for our team. But we’re getting near the end and it’s looking pretty good.

What was your favorite build?

It was the very first one, because the partner family and the construction team had a relationship that went beyond a partnership. The father was a union laborer with lots of contacts. He went above and beyond in contributing his sweat equity hours, and he was often able to call on someone he knew or worked with when there was a specialized task at hand. On the flip side, they endured a family tragedy and the build team was able to support them in a meaningful way. It was truly a partnership and it’s still the model for how the build team and the partner family can work together.

The best part of what you do?

There are so many things. It’s a great feeling when we hand over the keys to a partner family. It can make a tremendous difference in the lives of the parents and kids, and they’re just so happy and excited. The Saturday build sessions are fun. There are no egos and there’s a lot of ribbing, and generally just people who get along well while doing a meaningful job. It’s a good feeling when a previous partner family member shows up at the current site to volunteer, kind of completing the circle. And it’s always nice to see the fruits of your labor, a brand new home where there was either a run-down building or a vacant lot. 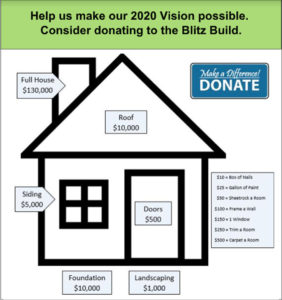 Prospective Habitat homeowners must commit to 250 hours of work for each adult residing in the home. Click here for a better understanding of "Sweat Equity".