In April of 2014, the WCHFH Board of Directors made a commitment to the Warren County community, and to Habitat for Humanity International, to complete five Habitat homes in the ensuing three years. That pace represented a major increase in production since five Habitat homes were completed in the previous six calendar years.

Two of those five homes were completed in 2014, and the third was dedicated in November, 2015. According to the three year plan, the last two homes were to be completed as a duplex, with a dedication target of March, 2017.

Construction of the duplex in Port Colden presented challenges to the Habitat team. To begin with, the fundraising team had to raise one and a half times the normal cost of a single family home. The building had a second story, which was not a normal undertaking for the construction team. The building codes, plot constraints, and additional needs for safety, security, and privacy added to the complexity. And the required architecture led to angles and heights that the team doesn’t normally encounter.

But the challenges have been overcome. At the end of 2016, the work remaining is minor in nature but time consuming. The two families are eagerly awaiting dedication day, the day they receive the keys to their homes. A family of six – a mom, dad and four children, will occupy one side, while a mother and her son will be the occupants on the other side.

As we come into the home stretch, it is clear that the three year construction program will be a major success. A total of twenty seven family members will call these structures “home”. The five families that partnered with Habitat are very different. Yet they are similar in their need for affordable housing and their ability to fund a down payment and to afford a no-interest mortgage. Also, they all had a willingness to post hundreds of sweat equity hours toward the completion of their homes.

Hope in the Hills of Warren

The Hope in the Hills of Warren team held a Day of Help in May. Nineteen families signed up for the program, which included spring cleaning type projects inside or outside of the home. Sixty volunteers signed up to provide assistance on the Day of Help. 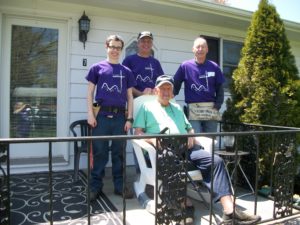 A Weekend of Hope was held in June. Activities on this weekend included light home repair, painting, and landscaping projects. Twenty-one families enrolled in the program and seventy volunteers performed the work on their homes.

As with all of the HHW events, work teams were comprised of adults and teenagers, and homeowner eligibility was limited to families with elderly, low income, and disabled members. This year, between the Day of Help and the Weekend of Hope, volunteers contributed over 2,500 hours of their time to help out in the community.

In an exciting development, a program patterned after HHW was piloted in Belvidere in November. Billed as the Day of Help, it was conceived and sponsored by members of the Belvidere United Methodist Church. It featured fall yard cleanup for elderly, disabled and veteran families, and five Belvidere homeowners participated in the trial. Organizers deemed the concept successful, obtained valuable experience, and plan to expand the program next year.

Special events continued to fund the mission and energize the teams. These popular events are open to the public and in 2016, they included the Beams and Dreams auction (our signature event) in April; the fourth annual ReStore Anniversary Sale in May; a Lowe’s sponsored Women Build weekend in May; the third annual Golf Event in June, sponsored by Absolute Home Mortgage Corporation; and the second annual Bowling event in August, hosted by Oakwood Lanes.

Of course, none of this would be possible without the dedication of our staff and volunteers, and the generosity of our donors, sponsors and partners. Our partner families and our teams would like to extend a heartfelt thanks and God Bless to all who have contributed to our success throughout the year.