Homeownership is a crucial foundation for helping low-income families find a path out of poverty. When they move out of substandard housing and into simple, decent, affordable homes, homeowners and their families frequently improve their health, educational attainment, safety and personal wealth. 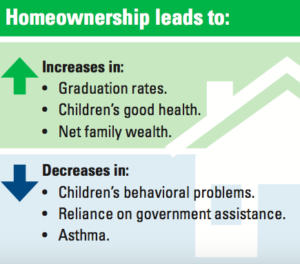 “A quality home is more than just a roof and walls,” said Renée Glover, chair of Habitat for Humanity International’s board of directors. “It provides homeowners with feelings of stability and pride, as well as generating measureable results such as decreased doctor visits and increased high school graduation rates.

“Academic research and surveys point to one inescapable conclusion: that owning one’s home enhances quality of life in a variety of specific, verifiable ways. This is true whether the homes are associated with Habitat for Humanity or not.”
The U.S. Department of Housing and Urban Development says studies have shown that “homeowners accumulate wealth as the investment in their homes grows, enjoy better living conditions, are often more involved in their communities, and have children who tend on average to do better in school and are less likely to become involved with crime.”

The research is clear:

• Children of homeowners are significantly more likely to stay in school until age 17 than children of renters, especially in low-income households, according to a study in the Journal of Urban Economics.
• Children in homeowning families outperform children in renting families in both math and reading achievement tests, even when other factors are the same. These children will have fewer behavioral problems, higher educational attainment and greater future earnings, according to a study by an Ohio State University economist.
• A 2011 survey of U.S. Habitat homeowners by the University of Southern Indiana found that 57 percent of adults in the households were furthering their education.
• The graduation rate for children of homeowners is 19 percent higher than for renters, and they are twice as likely to acquire some postsecondary education, according to a study in a journal published by the Federal Reserve Bank of New York.

Homeownership helps generate wealth building and a pathway out of poverty.

• “For most buyers, homeownership leads to wealth creation,” stated a report in the Journal of Housing Studies. “As home equity increases, some homeowners may decide that they have the financial resources to secure additional education for themselves or their children.”
• “The median net wealth of low-income homeowners is dramatically higher than the median net wealth of low-income renters,” according to a 2005 report by the Joint Center for Housing Studies.
• The Minnesota survey of Habitat homeowners found that 53 percent said they have more money since moving into their Habitat home; two-thirds are more confident about their ability to fund their children’s college education; and almost 40 percent said they pay less in housing costs. Use of govern- ment assistance also declined notably.
• A 2014 study by the Federal Reserve Bank of Boston of homes with a student about to enter college found that a modest in- crease in home value for homeowners led to an increase in the child’s earnings later in life, while an increase in a property’s value for renters led to a decrease in the child’s earnings.

The benefits of homeownership are indisputable. Since 1976, Habitat for Humanity has helped more than 1 million families worldwide with housing solutions leading to decent, affordable shelter. That represents about 5 million people. We will continue to work toward a world where everyone has a decent place to live, and where measurable improvements in health, education, security and wealth generation are enjoyed by more and more homeowners.