Their day had finally come!

They had waited over a year, and put in hundreds of hours of work, but on a Sunday in March, it all came to fruition. Two Habitat partner families and dozens of well-wishers attended the dedication ceremony for the Port Colden duplex that is now home for a family of six, and a mother and her son. 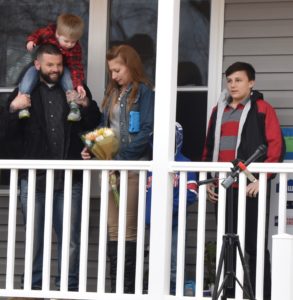 “This is an amazing day,” gushed Pete, partner dad of the family of six. “We took a shot in the dark and applied, we weren’t sure if we would qualify, but we did. We’re moving from an apartment with two bedrooms for us and the four boys, so for us this is like moving into a mansion!” Added his wife Robin, “most surprising is how so many people who don’t even know you do things for you. Half the workers I haven’t even met and yet they were here every week working on our home.”

Tammy, a partner mom now living on the other side of the duplex, expressed amazement and gratitude. “At times, we were staying with different friends or families, on couches, and basements and spare bedrooms. This is quite a blessing for us,” she stressed.

Melissa Flynn of the Family Support Committee thanked the groups and organizations that donated housewarming gifts of small appliances, kitchen items and housewares. Dozens of volunteers attended the dedication ceremony. 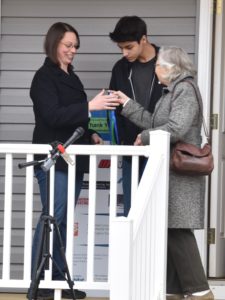 Vic Bozzuffi, construction supervisor, was happy that so many members of the build team were able to attend. Construction of the duplex was a a new experience for the team as it was a departure from the simple, one story structures they usually build. The complexity of the architecture was necessary to fit in with homes in the neighborhood, but presented quite a challenge for his team.

John Rolak, president of the WCHFH Board of Directors officiated. “This is a big day, not only for our partner families, but for our affiliate because we have so many volunteers who contributed to making this day possible,” he explained. “These are the thirteenth and fourteenth units we’ve built here in Warren County. However, through the Christian principle of tithing, we tithe to Habitat for Humanity, International, and twenty-six homes have also been built in Honduras through these efforts.” 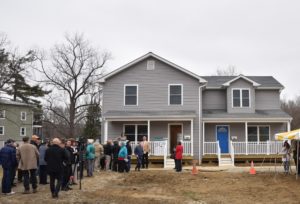 Ben Eskow, Executive Director, recounted the effort involved in providing decent, affordable homes such as these in Port Colden. “When you’re talking about a home like this, there’s a lot that gets put into it,” he explained. “Plumbers, electricians, roofers, foundation workers, sheet rockers, legal and financial professionals, fundraisers. We get help from churches, outside organizations, donors, sponsors. The list goes on and on. It really takes an army to pull off something like this.”

The work of this Habitat affiliate continues, as they plan to break ground in May for a veteran family build. But this day belonged to Tammy, Robin, Pete and the children.

Pete summed up the emotions of the day. “It’s very, very, exciting. Unbelievable.”